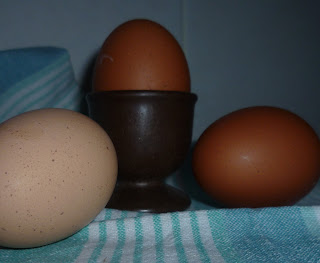 These lovely dark shelled eggs are the first from our Wheaten Maran chooks, I have placed an Isa brown egg  in for comparison
There are several different varieties of Maran birds some of them are Black Copper Maran, Cuckoo Maran and Copper Blue Maran. The darker the hen the darker the egg shell. They are known as the black egg layers. (Google Maran poultry, have a look)
Maran are named for the town where they were first bred, Marans in Southern France.They are a good heavy bird, lay well and are said to be good eating as well but I very much doubt if we will be eating any of these, they were NOT CHEAP !! Fertile eggs are sold at $100 per dozen and that  is the cheapest I could find. A game of chance when you buy eggs because almost always, not all of them will hatch out. I prefer to pay a bit more and get week old chickens. That way you know if they are healthy, they have survived the first week and from there on its up to you. 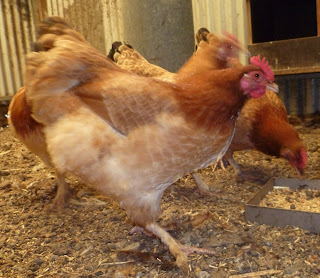 This is a picture of some of our hens, aren't they pretty? They have feathered legs and feet.
For the time being we have them running with
our Australorps but now they have started laying they will need to be separated so that they  don't cross breed. 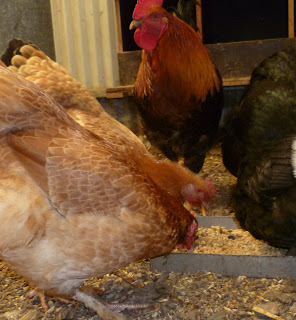 In the middle of this shot you can see the rooster, a very handsome fellow and to the right hand side, one of the Australorps.
Posted by Olive at 11:30 AM 6 comments:

Some things make me REALLY angry 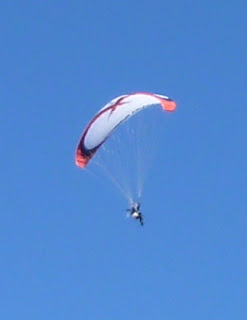 We live quite happily here in the serenity of the hills district, but then something like this happens........we heard from one of one neighbours   that the people that own a vineyard nearby were looking for ways to boost their business while the tasting rooms were open, using one of the other neighbours old (and dis-used) landing strip. (the landing strip was built during the last war for emergencies but has never been used as such)  Well, I thought, that will never get off the ground because the said landing strip is no longer registered or insured...and they  haven't  as yet got permission from all concerned. Case closed, or so I thought, because this airstrip runs the whole length of our boundary fence, and we would definitely say NO !!

Well last Sunday this motorised hang glider took off from the airstrip, buzzing all the local farm land around here, scaring all of the animals and disturbing our peaceful day in the garden.

Please don't get me wrong, I'm not against anyone trying to build their business or youngsters having fun, but when they do so, dis- regarding the welfare of others with highly pregnant cattle.............oh !! I GET VERY ANGRY.!!   We  (and our neighbours) have cows about to give birth and the terrain of our place is very steep, imagine a frightened cow, high in pregnancy trying to run from the side of a steep hill. She might slip and fall down the slope or mis-carry, which would cause the loss of either the calf or  both the cow and calf.

Colours of the Season 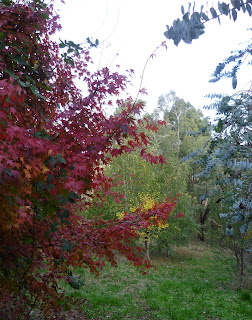 I am in awe of the beauty that surrounds us here in the Adelaide Hills. These pictures were taken late in the afternoon almost at dusk so they are not as bright as they would be if taken during the sunshine of the day.
This first picture is a Japanese maple, sadly (due to my neglect) a blackberry has taken hold of it. *note to self:, try to get down there and cut said blackberry out and poison the stump. The silver dollar eucalypt on the right side of picture has grown from seed planted by myself. Isn't it amazing how a tree of such a size will grow from a tiny seed, so small it looks like a speck of dust?

Now this next shot is the foliage of the same Japanese Maple from a different angle, the light (what there is of it) now behind me, playing tricks, changing the colour completely. 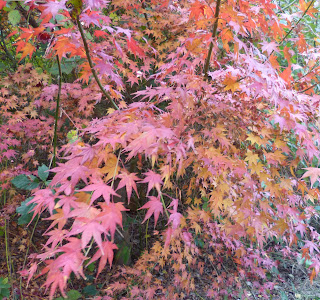 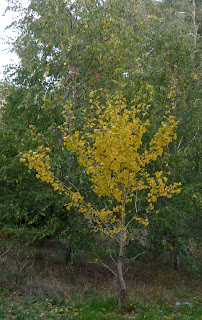 The little Maidenhair tree on the right has already lost most of its foliage, but the colour really stands out with the Silver Birch behind which hasn't (as yet) caught up with the seasonal change.
The Maidenhair has suffered greatly, I had it growing in a pot for a couple of years, waiting to plant it out in my "park" and the crazy dog that we had bit it in half (hence the strange shape) It has been in this position for about 12 years and the Birch behind for 10 years. Maybe it has the sulks. 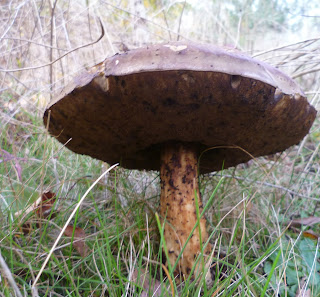 I don't think we will eat this one !! HUGE,,,about dinner plate size. 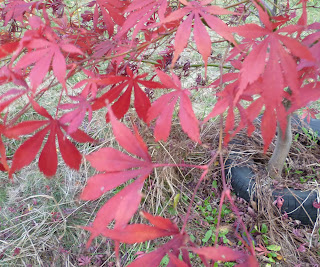 Another Japanese  Maple further down in the park.
Very slow growing, this one is a grafted variety while the first one was a seedling. Much brighter. 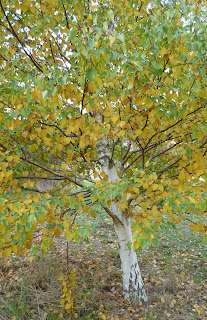 Another of the Silver Birches, this one has realised that winter is on its way and decided to show its beauty. Altogether we have 20 or so Silver Birch trees, I love them but my husband (being a European) hates them, only good for fire wood in his eyes. He tolerates them because of me :) 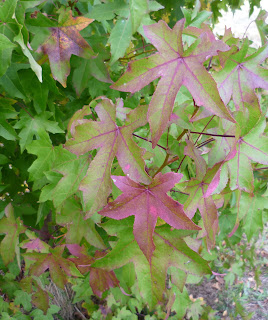 The Liquidamber (Sweet Gum) is also slow to put on a show while other trees of the same type around the neighbourhood (I've noticed) are already bright red, orange and purple, what a variety of colours on one tree ! 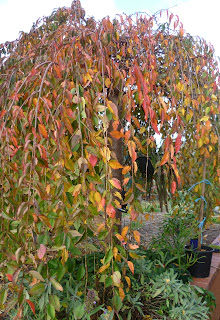 Last...but not least, the weeping Cherry tree that is growing just outside of our dining room window. Looking a tad bedraggled now but much better in real life.